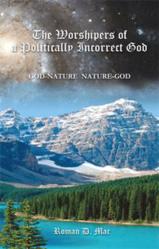 In his book, Winding Paths to Freedom, published in 2008, Roman Mac described a tough, fascinating life as a teenage Ukrainian freedom fighter during and after World War II. In Worshipers of a Politically Incorrect God he presents a sequel to his story. Here he reviews some of the events of his earlier book and adds much more on his transition to life in the West. He mentions the fears and frustrations encountered in a new environment where freedom affords opportunities for all including enemy spies or people who want to exploit him.

Roman Mac recounts events from his days as a young guerrilla that keep haunting him and provides deep insights into the emotional turmoil that keeps him depressed. To alleviate severe anxiety over man’s inhumanity to man, he searches for God’s help and finds it in nature. In time, he studies writings of philosophers at Columbia University and realizes that the writings of Baruch Spinoza, a seventeenth century philosopher, which equate nature to God, are closest to his own belief. This understanding helps him alleviate some of his anxieties. While his understanding of God-Nature, Nature-God deepens, he continues to appreciate and support the traditional Christian beliefs even as some believers do not agree with his outlook.

The new freedoms the author has found in the U.S. provide him opportunities to learn about history and geopolitics, especially as it has affected his homeland. He expresses bitterness over that and brings out other governmental insensitivities, causing his anxieties to re-surface. As his reflections continue, Roman recounts his service in the U.S. Army and its proud heritage. Following his Army service, he returns to New York City where he studies music and graduates on the GI Bill. He finds that he is now better able to resist people who pressure him to get involved in clandestine operations. He pursues his musical talents and his acquired skills to repair musical instruments. In time he establishes his own business that provides him with a livelihood for life.

Toward the end of this book, Roman uses his life experiences and insights to point out the dangers of human meddling with nature. It has lead him to write about the most arcane weapons systems developed by the superpowers that could harm or even destroy the Earths ecological balance and all its living creatures. This engrossing, easy to read sequel to Roman Macs earlier autobiography is a true story of rags to riches with all the inherent opportunities, disappointments, and triumphs available to immigrants only in America.

For more information on this book, log on to http://www.Xlibris.com.

Roman D. Mac was born April 26, 1932 in Western Ukraine. He lived through the start of World War II and joined Ukrainian underground in 1944. In 1948 he came to West Germany, and in 1950 emigrated to the United States. During the Korean War, Roman Mac served in the U.S. Army. In 1960, he graduated from Columbia University with a BS in Music. He and his wife Anna have two children, Motrya and Andrew. In 1985, his family moved from Long Island to Bethlehem, Pennsylvania where he, in collaboration with Martin Guitar, opened a business manufacturing accessories for musical instruments. The memoir of his underground activities was published in 2009 under the title The Winding Path to Freedom and is a top seller on Amazonbooks.com. His website is http://www.windingpathtofreedom.com.

The Worshipers of a Politically Incorrect God * by Roman D. Mac

More Christian News and Events from Around the Web

“From then on,” he said in a 1982 Saturday Evening Post interview, “there was never any question. I knew I was to practice my Christianity through my surgery.”. The news of Dr Koop’s nomination created a minor political firestorm, which delayed his final confirmation for eight months. Find news and information on.

Benedict got it right when he said Christianity should not be presented as a series of “no’s” but as a “yes” to Jesus and his message of love, life, justice, peace and community.

The Christian Broadcasting Network is providing medical help to more than 3000 people in Cambodia. … Sign up for the CBN News Dispatch and receive CBN News Reports in your inbox each day.Subscribe Now >> …

ChristianityToday.comThe Gospel Hand-OffChristianityToday.comBiblical texts were available in Ethiopia as early as the 5th century, specifically in the Semitic language of Ge’ez. As Islam spread across North Africa, many Ethiopian Christians resisted …